Oh, my–almost two weeks have passed since my trip ended. I’d better get this post up, huh? 🙂

I left Colorado just in time to escape 98-degree, bone-dry days and the worst of the wildfires, and flew into NYC just in time to catch 98-degree, 100%-humidity days that made me feel like I was back in the rainforest. A really loud, crowded rainforest that smelled like rotting garbage.

My first literary destination was KGB Bar, where my good friend E.C. Myers packed the house for his reading from Fair Coin. Standing room only! If I ever do a public reading, I can only hope to be half as funny and engaging as he was.

The next day, I headed down to Soho for a get-to-know-you-in-person lunch with Gladys Gatsby‘s lovely editor, Shauna Fay Rossano. We had e-mailed and talked on the phone several times, but this would be our first face-to-face meeting. She gave me a choice of restaurants, each with a more fabulous-sounding menu than the next, and I was having quite a time choosing, but I finally went with this one…

…because the NY Times hinted that they might just have the best pie in the city. Total scale-tipper. Also, when I asked Shauna if she wanted to split a slice and she immediately proposed we get the peanut butter pie, I knew I was working with the smartest editor in town. 🙂

Yes, I remembered to take a picture of the pie, but somehow forgot to get a picture of me and Shauna at lunch. D’oh! But there would be a chance to remedy that later. In the meantime, we parted ways, and I took a wander through Soho. Here’s a sign I enjoyed in the window of the McNally Jackson bookstore.

A weekend went by. I spent time with family, visited friends, went to a wedding.

But then Monday found me and Andy venturing out to Flushing, where we had somehow convinced Shauna and her husband to meet us at Fu Run, a restaurant specializing in the “Dongbei” cuisine of northeast China. We chowed down on dishes like the “Muslim lamb chop” (not a chop, but actually an amazing rack cumin-crusted lamb ribs) and “green bean sheet jelly” (actually a spicy cold noodle dish). Of course, I needed to get a glamour shot of the lamb ribs…and luckily remembered to pose with Shauna in the same picture!

A few days later, I spent the day at Coney Island with my sister. We rode the Wonder Wheel and got hot dogs from the original Nathans and spent hours watching walruses play at the aquarium. I took lots of atmospheric pictures, since I’m planning to set a scene at Coney Island if I ever write a Gladys sequel!

Brooke and I also took some fittingly old-timey self portraits, thanks to the magic of Instagram. 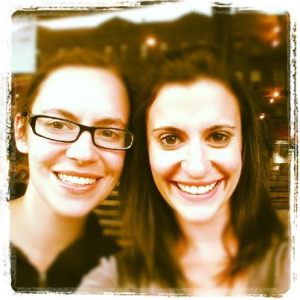 At the end of the day, we wandered over to Brighton Beach to eat delicious potato/mushroom- and meat-stuffed vareniki (Ukranian dumplings) at Cafe Glechik. I had read somewhere online that a $7 order came with more than 20 vareniki, but I didn’t believe it until they were right in front of me. SO. GOOD.

Fast forward a few days and a Megabus ride, and I found myself in Boston, ready to have my second literary power lunch of the trip–with my awesome agent, Ammi-Joan Paquette! Stupidly, I had so much fun hanging out with Joan that I forgot to get a picture either of the food (a delicious date-and-mascarpone “pizza”) or of the people. All I’ve got is this exterior shot of the restaurant in Harvard Square (in fact, the only photo I took the entire three days I spent in Boston, despite seeing many old friends and engaging in fun activities like kayaking on the Charles.).

But I made up for that by taking plenty of pictures during the next part of my trip, a swing through New Hampshire and Vermont. The sole purpose of this leg was to finally meet my critique partner extraordinaire, Ann Bedichek, in person! Here we are with an order of garlic knots at Ramuntos in Hanover, NH–which make a greasy, delicious cameo in Ann’s middle-grade manuscript Scientastic Supergirls.

The fact that Ann and I were only just meeting in person that day was kind of ridiculous if you know our history, which includes graduating the same year from the same college, where we apparently had a slew of mutual friends and Ann did the same three-month foreign study program as my future husband. Three years ago, Andy and I got married a few miles from where Ann and her husband live, and last summer we were all at our 10-year college reunion…and yet Ann and I still managed not to cross paths in life until we entered the same pitch contest last fall and ended up connecting online as writers.

Lo and behold, now she’s my number-one beta reader and we’re agency-sisters…so it seems that we finally got the memo that the universe want us to be friends. 🙂

Anyway, I was lucky enough to spend my final weekend on the east coast hanging out at Ann and Dan’s house, picking herbs at the local farm with their adorable son Ethan, drinking chocolate frappes at LA Burdick, and taking a dip at my favorite wedding venue, Alyson’s Orchard.

How can you not be happy when you’re sitting on a dock, listening to the frogs sing, on a beautiful pond in New Hampshire? 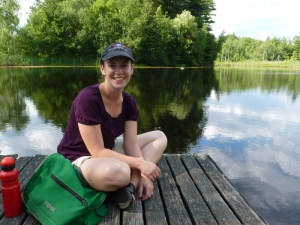 Let’s leave it there. Sure, there was a long train ride, and a few more days spent in New York, but I think I’ve shared most of the important parts. I was happy to go back east, to reunite with family and friends and meet some amazing new people. But I’m happy to be home now, too, where the mountains tower outside my window, I pass deer and prairie dogs on my bike ride to work, and most days I have the time and calm to get some writing done.

(I do wish we had better vareniki here, though.)

13 thoughts on “A very literary (and tasty!) east coast trip”