Welcome to the inaugural interview in my new series, Colorado is for Writers! Every other Tuesday, I’ll be talking to different Colorado-based authors about their work and their connections to this beautiful state. And this week we have a giveaway, too! See the end of the post for details. 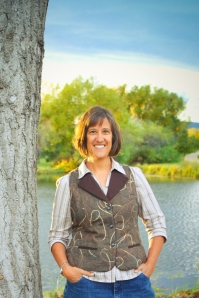 Native, born and bred. In fact, my mother was also born in Colorado, as were both of her parents, in 1910 and 1912 respectively, so our family has some pretty deep roots here. That doesn’t mean, however, that we are a bunch of homebodies that never get out. We’ve explored pretty much every inch of the state in our summer camping and hiking adventures over the years, as well as traveling around much of the West. It was all that daydreaming in the car, on the trail, or at night under the stars that honed my writer’s imagination as a kid. That’s why Colorado/Western history features prominently in much of my writing. 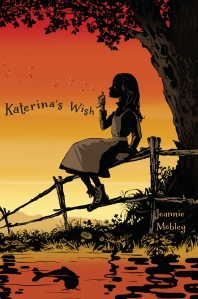 Please tell us a bit about your book(s), published and/or in progress!

My first book, KATERINA’S WISH, was published in fall of 2012, and just won the 2013 Colorado Book Award for juvenile fiction! (Which I hope means books for juveniles, rather than being a reflection on my own personality.) It is the story of an immigrant family in the coal mining communities of southern Colorado at the beginning of the 20th century. Trina’s family came to America for a farm, but end up barely scraping by in the coal mines. Then Trina sees a fish that reminds her of a folk tale about a fish that grants wishes. She wishes for her family’s dream of a farm, and lucky things begin to happen. But is it magic, or is something else behind their success? It is the story of one family’s American dream, and the risks they must take to make a dream come true.

Jeannie’s teenage grandmother and her friends at the family cabin in Silverplume, Colorado, during prohibition (which, you can see, they weren’t exactly in accordance with)

My second book, SEARCHING FOR SILVERHEELS, will be published in fall 2014. It is the story of 13-year-old Pearl Rose Barnell, a romantic girl who waits tables in the Silverheels Café and delights in telling tourists a local legend of the dancehall girl Silverheels. But, as the summer of 1917 heats up, so too does the First World War, along with accusations of un-American behavior and the outrageous fanaticism of a local suffragist, with whom Pearl has taken a potentially dangerous bet.

Beyond those, I have a variety of other projects in the works, ranging from contemporary humor to historical fiction. I seem to get new ideas for stories much faster than I can turn them into books.

What’s the view like from your favorite writing space?

I like to write either outside or where I can see the outside. When the weather is conducive, I write at my picnic table on the back patio. When it is either too hot or too cold for that, I work in the sunroom on the back of my house that looks out onto our back yard. It’s not a big back yard, but the trees and bushes make it feel peaceful and somewhat secluded (even though it really isn’t). And even though my room is called a “sunroom” I love working out here in the winter when the snow is falling outside the windows. Very peaceful.

Jeannie’s family setting off on a camping trip, circa 1978 (that’s Jeannie and her malamute in the backseat)

What’s the best thing about being a writer in Colorado?

I love Colorado because of the scenery, the outdoor lifestyle, and because my family and my memories are here. I used to love it for the weather, too, although this year I’m not so sure. I could be a writer anywhere, but at heart, I am a mountain person. Mountains feed my soul better than any other kind of landscape. I listen to the mountains—there are stories in the silences of the high elevations and the old ghost towns. There are places where stopping and doing nothing is very productive. Where the stillness, the vastness, the timelessness bring my senses to hyper-awareness. The Colorado Rockies* awaken a sense of wonder in me that I try to keep at the heart of my writing life. I could work in another environment, but why would I want to?

*This refers to the mountains, not the baseball team. Although the MLB Colorado Rockies also awaken a sense of wonder—as in, I wonder why they can’t ever get a decent bullpen???

Thank you so much, Jeannie!

Giveaway: Would you like to win a signed copy of KATERINA’S WISH (complete with a shiny gold “Colorado Book Award Winner” sticker on the cover)? Just leave a comment that answers this question: What kind of landscape leaves you with a sense of wonder? The winner will be announced next Tuesday, July 23.