Welcome to the first post in my brand new new blog series, Foodie Kidlit Friday! Every other Friday, I’ll be talking to authors of great food- and cooking-themed books for kids and teens, giving books away, and sharing recipes from my own forthcoming foodie middle-grade novel, All Four Stars.

To kick the series off, I am so lucky to welcome the talented Kelly Fiore to the blog! Kelly’s debut young adult novel Taste Test was published on August 27 by Bloomsbury USA–it’s received excellent reviews, and this particular reader just couldn’t put it down. 🙂

Kelly not only agreed to answer my questions, but is also giving away a signed book and swag to one lucky commenter (details at the bottom of the post), so be sure to leave a note and enter!

If you can grill it, smoke it, or fry it, Nora Henderson knows all about it. She’s been basting baby back ribs and pulling pork at her father’s barbeque joint since she was tall enough to reach the counter. When she’s accepted to Taste Test, a reality-television teen cooking competition, Nora can’t wait to leave her humble hometown behind, even if it means saying good-bye to her dad and her best friend, Billy. Once she’s on set, run-ins with her high-society roommate and the maddeningly handsome—not to mention talented—son of a famous chef, Christian Van Lorten, mean Nora must work even harder to prove herself. But as mysterious accidents plague the kitchen arena, protecting her heart from one annoyingly charming fellow contestant in particular becomes the least of her concerns. Someone is conducting real-life eliminations, and if Nora doesn’t figure out who, she could be next to get chopped for good.

Kelly Fiore: Hi Tara – it’s so great to be here! Thanks so much for the opportunity to chat with your readers! 🙂

TD: Let’s jump in with some food talk right away. Your main character in Taste Test, Nora, is a serious cook—though her taste is more down-home barbecue than haute cuisine. Does that reflect your own culinary background, or was it more of a conscious choice you made specific to Nora’s character?

KF: It’s a little bit of both, I think. I’m from Maryland, where we’re know more for our blue crab feasts than barbecue, but I grew up next to the grill while my dad cooked his famous pork ribs. Like Nora says in the book, barbecue has its own language and I feel closest to the North Carolina style, with an emphasis on pork.

When I wrote Nora, I wanted to write her as a spunky, present-day Joey Potter (from Dawson’s Creek): a not-so-rich, not-so-uppity smartass who could hold her own next to tough competitors. I wanted her to be an expert in something that wasn’t considered “fancy” so that she could prove that the art of cooking isn’t just about ingredients – it’s about technique and flavor, too.

TD: One of the (many, many) things I loved about Taste Test was how each dish cooked by a teen contestant on the show reflected his or her personality. What was your method for coming up with the right choice for each character? Did you have to make lists and charts, or were you able to come up with the right food-fits on the fly?

KF: I think the food writing was, by far, the most difficult part – I worried a lot about things feeling authentic. It’s surprisingly (or not surprisingly?) hard to write that momentum of a food competition – the vigor and energy, along with the cooking itself. I’m glad you feel like the food reflects the contestants because I tried to make sure each contestant, especially Nora and Christian, was cooking food that they had experience with in their “everyday” life. I actually have a back log of recipes I didn’t use for the book because they really didn’t have a place in the final manuscript.

In terms of method, this is where I checked out the cooking competition Top Chef for ideas on themes and ingredients chefs gravitated toward. But, because this is a book for teens and I wanted teens to actually cook the recipes at the end of the book, I tried to pick things that would cater to their tastes as well. 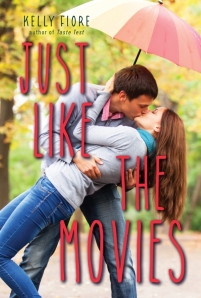 Courtesy of YA Books Central, where you can enter another giveaway for Kelly’s books! (Click image to go to that post.)

TD: Taste Test is your debut novel, but you have more books on the way. Will they feature foodie themes, too, or go off in a different direction?

Unfortunately, no food 😦 But I have two books coming out over the next year and a half or so. Just Like the Movies is my sophomore novel, again from Bloomsbury USA. It’s about two girls – a bubbly-but-insecure track star and a quiet-but-sarcastic wallflower – who have nothing in common except an appreciation for great movies and the desire to have a perfect, Hollywood love story. When they meet by chance at a screening of Titanic, they formulate a plan to help spring their love lives into action – by using movie strategies made famous on screen. This book has everything – flash mobs, makeovers, meet-cutes, and, of course, the infamous John Cusack/Boombox scene – but this time, it’s using an iPod and speakers. 🙂 Just Like the Movies comes out in July of next year.

In contrast, my first novel with HarperTeen, The People Vs. Cecelia Price, is a far darker, more gritty subject. It’s still YA, but it focuses on the inner workings of a family that is struggling with addiction, and the aftermath of an unexpected death. The main character, Cecelia, is in custody for the murder of her brother, Cyrus. As we get to know CeCe, we find out how incredibly damaged and volatile her life had become – and how she had to shift from part time student to part time drug dealer in the blink of an eye. The People vs. Cecelia Price is scheduled to release in Winter 2015.

TD: These sound so different and intriguing, Kelly–congratulations on your success in writing and selling such a variety of books!

Last question: It’s Friday night. Are you at home trying a new recipe, or out on the town, trying an exciting new restaurant?

Since Book Club was last night and I had a delicious night out with some girlfriends, tonight I’m staying in. I think I’m going to make a spicy marinara with pasta for dinner tonight. I canned a heap of tomatoes over the summer, but I have a feeling they won’t last through to next year. Being married into an Italian family means Sunday Sauce (or Sunday Gravy, as some Italians call it) almost every weekend.

Thank you so much, Kelly! Happy writing (and eating)! 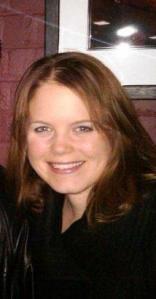 Kelly Fiore has a BA in English from Salisbury University and an MFA in Poetry from West Virginia University. She received an Individual Artist Award from the Mid Atlantic Arts Council in both 2005 and 2009. Her debut young adult novel, Taste Test, is available now from Bloomsbury USA. Her forthcoming titles include Just Like the Movies (July 2014, Bloomsbury USA) and The People Vs. Cecelia Price (Winter 2015, HarperTeen). She lives in Maryland with her husband, son, and two very feisty cats.

Giveaway details: Kelly has been kind enough to offer the following prizes for one lucky commenter! (This is a US-only giveaway.)

You can earn one entry by leaving a comment here, and up to two extra entries by posting about this interview on Twitter and/or Facebook! Please include a link to your tweet or FB status in your comment to qualify for the extra entries.

Thanks again for reading and entering! Good luck!